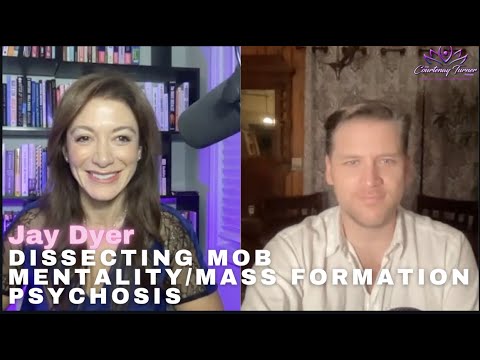 In this episode, Courtenay invites Jay Dyer back to the show to discuss the progression of mass formation psychosis, aka mob mentality. The four keys to execution are infusing isolation, lack of purpose, constant anxiety, and frustration into a society in order to usher in supreme power and dependency. Jay takes listeners through this process as seen with the foundational cracks being made to the home, supplemented through power archetypes such as Mommy/Daddy State, Big Brother/ Big Sister. In addition to this societal destruction, there are religious uprooting tactics and CIA operations being initiated through cult formations in order to further install these supremicies. He outlines the geopolitical strategies of the elites as expressed in their own words through various white papers & books delineating how psychological and biological warfare are utilized to control the masses.

Jay is an author, comedian, and TV presenter known for his deep analysis of Hollywood, geopolitics, and culture. His graduate work focused on psychological warfare and film. He is also the author of two books, Esoteric Hollywood 1 & 2 and the co-creator and co-host of the television show Hollywood Decoded. He has been featured on numerous popular shows, podcasts, and debates with some of the world’s top debaters.

PS. I want to make note that my references in the discussion were not an exact quote of Sartre: the correct quote (translated) – Sartre said “Man is condemned to be free; because once hurled into the world, he is responsible for everything he does.”

It is Heidegger who elucidated the notion of “throwness”. “Man is the shepherd of Being. Man loses nothing in this “less”; rather, he gains in that he attains the truth of Being. He gains the essential poverty of the shepherd, whose dignity consists in being called by Being itself into the preservation of Being’s truth. The call comes as the throw from which the thrownness of Da-sein derives. In his essential unfolding within the history of Being, man is the being whose Being as ek-sistence consists in his dwelling in the nearness of Being. Man is the neighbor of Being.”

Books:
Hannah Arendt- the Human Condition
The Origins of Totalitarianism
On Revolution
On Lying and Politics

H. G. Wells: The Shape of Things To Come

This is a demo store for testing purposes — no orders shall be fulfilled. Dismiss